There are no ordinary people

When God wanted to create something in His image--to be more like Him than anything else in all of creation--He made us! (Genesis 1.26)

Above the stars and skies, above the most maginficant of beasts and swimming things, above the most beautiful of flowers and majestic forests, beyond the angels, humans alone have the highest diginity and signifcance: we alone are created in God's image. Every human being. All human beings.

Marred and twisted by sin, all of us. And all disfigured by brokenness and weakness, but still bearing God's image.

This news must change the way we think about, act toward, speak to, and care for every other person. Every race. Every religion. Every gender. Every nation. Born and unborn. Young and not so young. Rich and not so rich. Huge home and no home. Republican and Democrat. American and North Korean. Dignity and respect for all those made in the glory of God's image.

The load, or weight, or burden of my neighbor’s glory should be laid daily on my back, a load so heavy that only humility can carry it, and the backs of the proud will be broken.

It is a serious thing to live in a society of possible gods and goddesses, to remember that the dullest and most uninteresting person you talk to may one day be a creature which, if you saw it now, you would be strongly tempted to worship, or else a horror and a corruption such as you now meet, if at all, only in a nightmare.

All day long we are, in some degree, helping each other to one or other of these destinations.

It is in the light of these overwhelming possibilities, it is with the awe and circumspection proper to them, that we should conduct all our dealings with one another, all friendships, all loves, all play, all politics.

There are no ordinary people.

You have never talked to a mere mortal.

Nations, cultures, arts, civilization—these are mortal, and their life is to ours as the life of a gnat.

But it is immortals whom we joke with, work with, marry, snub, and exploit—immortal horrors or everlasting splendors.

This does not mean that we are to be perpetually solemn.

But our merriment must be of that kind (and it is, in fact, the merriest kind) which exists between people who have, from the outset, taken each other seriously—no flippancy, no superiority, no presumption.

And our charity must be real and costly love, with deep feeling for the sins in spite of which we love the sinner—no mere tolerance or indulgence which parodies love as flippancy parodies merriment.

Next to the Blessed Sacrament itself, your neighbor is the holiest object presented to your senses.

-The Weight of Glory 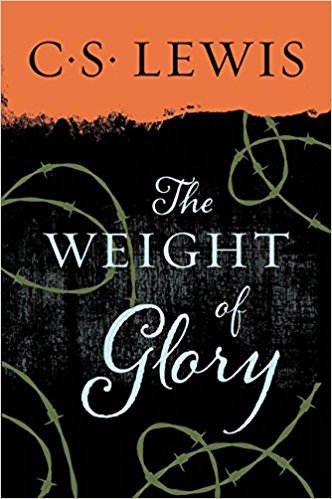