Pray for Peace in Kiev

An update from our denomination, the Evangelical Free Church of America (EFCA)

Pray for peace in Kiev, Urkraine

Equip the church amid protests in Maidan Square 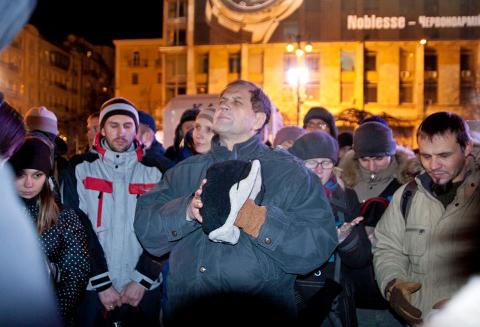 The following is a note from an EFCA ReachGlobal Kiev City Team Leader, Amy Richey, in partnership with Pastor Kaluzhny, who pastors a large congregation in Kiev.

Friends, as you may know the situation in Ukraine has escalated quickly over the past several days. Pastor Kaluzhny says, “The violence and the cynicism cannot be described by any words. As the result we have more than 1,000 injured and at least 25 killed, mostly—the protesters.”

Several thousand protestors have been putting pressure on parliament to revert the presidential powers to the original state of the constitution when President Yanokovich took power. When there was no vote, it resulted in riot police using force against unarmed protesters. By the end of the day on Monday, riot police began destroying the barricades and started taking over Maidan (the central area where the protesting has taken place).

On Thursday, the city of Kiev went into panic mode as the government ordered snipers to strike the protestors. More and more people were killed without adequate defense.
Amid it all, a prayer tent in the center of Maidan continues to minister with believers and non-believers alike. Many are calling out to God like never before. Kaluzhny adds, “As never before, we need God’s protection and a miracle.”

How to pray specifically:

1. Please pray specifically that those working in the prayer tent would be safe from harm. Pray that God would bring peace to many amid the complete chaos. And, that He would be glorified among the nations, amid the conflict.

2. Pray for the families who have lost loved ones in the violence and for the many medical workers who are tending to the wounded.

3. Pray for a peaceful resolution. Pray that the Ukrainian government would realize they are shooting their fellow Ukrainians. Pray that they would put down their weapons and that Russia stays out of the conflict.

4. Pray for quick and complete resolution to a very complicated situation throughout Ukraine. Pray for unity of believers and deep healing throughout the country.

5. Psalm 121:3-4, “He who watches over you will not slumber; indeed, he who watches over Israel will neither slumber nor sleep.” Pray that Ukrainians would be reminded that their creator knows all of these things and is with them during this terrible time of conflict. He is shalom amidst the chaos.

The Kiev City Team is seeking $25,000 to assist partners in continued ministry of tending the wounded, distributing Bibles, and feeding the homeless.

Please Pray and Give