Desiring God God-Centered Resources from the Ministry of John Piper 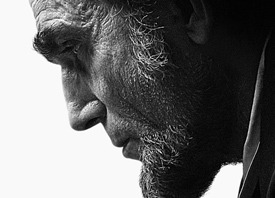 The impressive new feature film Lincoln brings with it a high-definition reminder of the tremendous strengths and flaws of, and the challenges faced by, the 16th president of the United States.

One struggle that finds its way into the movie — and one scene in particular — is the strained and complicated marital relationship between Mary Todd and Abraham Lincoln. And yet from their marital mess, there’s an abiding counter-cultural lesson from which all couples could learn, as John Piper explains in the following excerpt from his 1997 devotional A Godward Life, pages 33–35.

Enduring the Pain of a Flawed Marriage

Abraham Lincoln’s marriage was a mess, and accepting the pain brought deep strength in the long run.

I write this not because it is wrong to seek refuge from physical abuse, but because, short of that, millions of marriages end over the agony of heartbreaking disappointments and frustrations. They do not need to. There is much to gain in embracing the pain for Christ and his kingdom.

Our culture has made divorce acceptable and therefore easier to justify on the basis of emotional pain. Historically, the misery of painful emotions was not a sanction for divorce in most cultures. Marriage durability — with or without emotional pain — was valued above emotional tranquillity for the sake of the children, the stability of society, and in the case of Christians, for the glory of Christ. In Christianity such rugged, enduring marriages, through pain and heartache, are rooted in the marriage of God to his rebellious people whom he has never finally cast off.

“Your Maker is your husband… . For the LORD has called you like a wife deserted and grieved in spirit, like a wife of youth when she is cast off, says your God. For a brief moment I deserted you, but with great compassion I will gather you” (Isaiah 54:5–7).

Abraham Lincoln brought debilities to his marriage with Mary Todd. He was emotionally withdrawn and prized reason over passion. She said that he “was not a demonstrative man… . When he felt most deeply, he expressed the least.” He was absent, emotionally or physically, most of the time. For years before his presidency, he spent four months each year away from home on the judicial circuit. He was indulgent with the children and left their management almost entirely to his wife.

She pushed Lincoln relentlessly to seek high public office; she complained endlessly about poverty; she overran her budget shamelessly, both in Springfield and in the White House; she abused servants as if they were slaves (and ragged on Lincoln when he tried to pay them extra on the side); she assaulted him on more than one occasion (with firewood, with potatoes); she probably once chased him with a knife through their backyard in Springfield; and she treated his casual contacts with attractive females as a direct threat, while herself flirting constantly and dressing to kill. A regular visitor to the White House wrote of Mrs. Lincoln that “she was vain, passionately fond of dress and wore her dresses shorter at the top and longer at the train than even fashions demanded. She had great pride in her elegant neck and bust, and grieved the president greatly by her constant display of her person and her fine clothes."1

It was a pain-filled marriage. The familiar lines in his face and the somber countenance reveal more than the stress of civil war. But the two stayed married. They kept at least that part of their vows. They embraced the pain, even if they could not (or would not) remove it.

What was the gain?

God will give the final answer, but here are two historical assessments.

(1) How was it that Lincoln, when president, could work so effectively with the rampant egos who filled his administration? “The long years of dealing with his tempestuous wife helped prepare Lincoln for handling the difficult people he encountered as president.” In other words, a whole nation benefited from his embracing the pain.

(2) “Over the slow fires of misery that he learned to keep banked and under heavy pressure deep within him, his innate qualities of patience, tolerance, forbearance, and forgiveness were tempered and refined.” America can be glad that Lincoln did not run from the fires of misery in his marriage. There were resources for healing he did not know, and short of healing, embracing the fire is better than escape.

Increasingly, contemporary culture assumes the opposite. Pain-free relationships are assumed as a right. But God promises his people something better:

“Blessed is the man who remains steadfast under trial, for when he has stood the test he will receive the crown of life, which God has promised to those who love him” (James 1:12).