I will not continue the anger. It has to stop with me.

Saturday, September 8, 2001 found Simon and Elizabeth Turner shopping for bottles, bedding and a baby monitor for their first child.

Three days later she called her husband, away on business in New York City. “I was freaking out about a stroller I wanted but wasn’t able to find. I was completely irrational, and he was like, ‘We’ll sort that out when I get back. The baby will have a stroller. There’s lots of strollers in the world and our baby will have one, so don’t worry about it.’”

Shortly after the call, Simon headed to his conference at the Windows on the World restaurant on the the 106th floor of the north tower of the World Trade Center.

At her office, TV’s were turned on with the crazy news that a plane had hit the World Trade Center. “As we stood watching and listening to all the commentary, we saw the little black dot come across the screen and watched live as the second plane hit the trade center,” says Elizabeth.

She tried calling Simon immediately, but his phone went straight to voicemail. And there was no answer at his New York office.

Not knowing what to do, not wanting to leave her office in case Simon tried to call her, Elizabeth walked into a meeting. To this day, she has no idea how it lasted.

For the next nine days, as her family gathered, her brother and Simon’s best friend went to New York to find what they could. Elizabeth retreated into herself where she held fast to the hope that her husband had somehow escaped.

Looking back, she describes those days as “like a smoke or a fog . . you can’t remember the bits in between,” but realizes that her family knew by then that Simon was dead. And that at some level, so did she.

“On one hand, I knew it was not good. I knew Simon would have contacted me immediately if he could. So then you’re thinking, well maybe he was trapped; maybe he was in the hospital. All these wild and wonderful scenarios that you create because you’re thinking, ‘I can’t be the one who gives up on him, because there will be a lot of other people who’ve already given up on him because he’s on a list of 3,000 people. I have to be the one who keeps pushing and pushing until someone says, That’s enough.’”

Enough came on September 20 when her family gathered around her and told her every avenue had been exhausted. Simon had died in the tower.

Two months later, Elizabeth and Simon’s son, William Simon Turner was born. She would have been happy with a baby of either gender, but a boy seemed fitting as William was the only name she 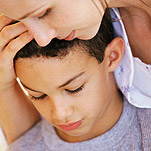 and Simon had come up with.

William will be ten in November, and considering what has happened, his mom says “he’s a very happy, well-adjusted normal boy who’s taken on an awful lot of information and dealt with it pretty well.”

In March of this year, Elizabeth took her son to New York so he could see for himself the city his father loved so much, and where he died. They visited his dad’s favorite coffee shop, saw a broadway show, and went shopping.

And they went to ground zero.

And as they stood there where this young dad-to-be’s life was taken so unfairly; where this wife was widowed so cruelly; where this boy lost a father so prematurely, Elizabeth would not give in to the temptation.

The temptation to anger and bitterness at the evil done to her husband, to her son, to her.

“What I have always said to my son is that because of what has happened to us, I am choosing to be one of the people who breaks the cycle,” she says. “I will not continue the anger and the killing. It has to stop with me.”

Jesus said, “Father, forgive them, for they do not know what they are doing.” Luke 23.34

We forgive. We forgive for good.