Certain Christian traditions tend to focus almost unilaterally on the suffering of Jesus on the cross, on the incredible pain he had to endure, and on his humiliation and separation from God.

This can be seen in cinematic depictions such as Mel Gibson's The Passion of the Christ, the Roman Catholic reenactment of his path to the crucifixion on the Via Dolorosa (the Way of Sorrows) in the stations to the Cross, and in quite a few sermons both of us have heard in the evangelical churches we attended (not to mention many of our favorite hymns).

Of course, the four biblical Gospels, especially Matthew, Mark, and Luke, concur that Jesus suffered a great deal for us as he gave his life for our salvation so that we could be forgiven of our sins.

And yet, there is another aspect to the Easter story.

It is best encapsulated in John's statement that Jesus, when he "knew that his hour had come to depart out of this world to the Father, having loved his own who were in the world … loved them to the end" (13:1, ESV). When introducing not only the scene of the foot-washing, but his entire passion narrative, John writes the following: "Jesus, knowing that the Father had given all things into his hands, and that he had come from God and was going back to God, rose from supper…" (13:3–4; cf. 14:28).

In other words, John is at pains to show that the Cross was not a dead end but a station on Jesus' way back home to the Father!

This is why he strikes a triumphant note at the outset of narrating the Crucifixion: The Father had given all things into Jesus' hands, and Jesus was on his way back to his pre-existent glory which he enjoyed with the Father (17:5, 24)! It is, as the writer of Hebrews put it, "for the joy that was set before him" that Jesus "endured the cross, despising the shame" (12:2).

This Easter, let's make sure we don't leave out the "glory" part when we tell the story of Jesus' suffering. 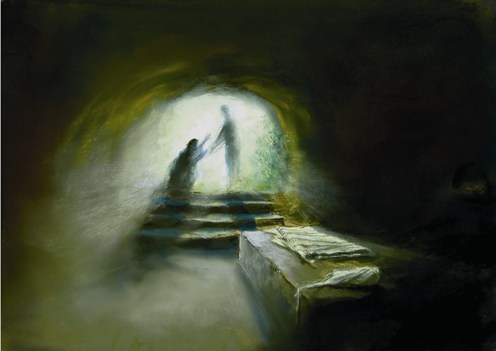 No doubt, the Cross was glorious in and of itself in displaying Jesus' perfect obedience, God's love for humanity, and the God-man's rendering of substitutionary atonement for sinners. Jesus' earthly work is indeed "finished" (John 19:30), but his glorious work of ruling, reigning, and interceding continues to this day.

(This essay is part of an article appearing in Christiainty Today, April 15, 2014. It was written by Andreas Köstenberger, senior research professor of New Testament and Biblical Theology at Southeastern Baptist Theological Seminary in Wake Forest, North Carolina, and Justin Taylor, senior vice president and publisher for books at Crossway. They co-authored The Final Days of Jesus: The Most Important Week of the Most Important Person Who Ever Lived (Crossway).)